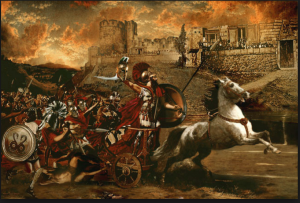 10.18.2017.1030 Battle of Thermopylae (The music is by composer Mic Roussos on soundcloud)  The Battle of Thermopylae was fought between an alliance of Greek city-states, led by King Leonidas of Sparta, and the Persian Empire of Xerxes I over the course of three days, during the second Persian invasion of Greece.  Date: 480 BC Result: […]